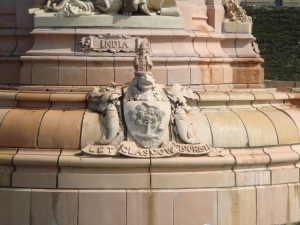 What a little gem this Glasgow crest is.  My interest not just being the amazing Fountain, my point of interest ,being the Crest embedded into the earthenwere brickwork on “The Doulton Fountain” at the People’s Palace, Glasgow Green.  The Fountain was devised by A. E. Pearce of Messrs Doulton for the 1888 International Exhibition in Kelvingrove.  After it was presented to the City by Sir Henry Doulton, it was re-erected where it stands today.

This Crest magnificently built into facade above the entrance to The People’s Palace.  The design embedded in to the Crest say’s,

Here’s the Bird, that never flew,

Here’s the Tree, that never grew,

Here’s the Bell, that never rang,

Here’s the Fish, that never swam.       It is said that there is a another line.    That’s jist the drunken Salmon!

Should you get the chance, pay this part of the East of Glasgow a visit, well worth it. 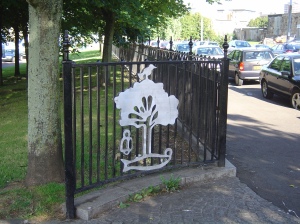 Walking through the back of the “Barra’s” heading towards Glasgow Green, I stumbled across this modern addition of the Crest.